The Surgeon and the General 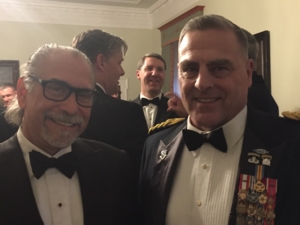 General Mark A. Milley, 39th Chief of Staff of the United States Army and member of the Joint Chiefs of Staff, United States Department of Defense, and Dr. Guy Rochman, Chairman and Chief Operating Officer of Worldpath Health and Assistant Professor of Surgery, Harvard Medical School, discuss the importance of the Worldpath Health role in international healthcare, and agree that healthcare transcends politics and national borders.

The winter is about to begin…. Don’t forget about your skin.

“Oh the weather outside is frightful” as the popular holiday song reminds us, but there is no reason why your face needs to be.   Winter climates mean we must pay a bit more attention to our skin, if we want it to be youthful for many seasons to come and avoid the risk of permanent injury.

The rosy red cheeks we get after coming in from the cold can cause dryness tightness, flaking, cracking and inflammation of the skin called eczema.  And although the warmth from the heat or fireplace when you get inside feels great, that too is drying to the skin. If left unattended, this will lead to premature aging and potentially irreversible damage to the skin.

Here are some simple tips to keep the skin kissable, once the mistletoe is no longer around.

Pollution: Public Enemy Number One For Your Skin

The danger of Sun Exposure and Ultraviolet Exposure (UV-A and UV-B) has long been known. I have written about the importance of protection from the sun in numerous articles and reports both here and elsewhere.  Even on cloudy days we must respect the power of the sun’s rays both in terms of cancer as well as premature aging of the skin.

However, our industrialized society also poses signification risks and hazards by exposure of chemicals and impurities to the protective barrier to the skin.

Pollution and smog result from chemicals that have become aerosolized and thus impact upon the purity of the air.  While urban areas are generally prone to higher risks, “air pollution” can be present and look different depending upon where one lives.  Arid and desert environments have a high incidence of dust pollution, areas near forests can have air polluted by smoke from wild fires, and agricultural areas can have air polluted by chemicals used on farms.

Any time chemical particulate matter is in the air, this type of pollution will play a role in the aging of skin.  This is why it is essential to defend your skin with a well-designed skin program.

Our office has created skin care protocols and programs for both male and female skin which are uniquely designed to:

The skin is the largest organ in our body, and our first line of defense against the environment.   With just a very few minutes of attention every day, our skin can remain youthful and healthy.  Contact our office for a consultation today to find out more about how to keep your skin at its best.

Remember, when it comes to sun, smog and smoke, we all have skin in the game!

America’s appetite for plastic surgery continues to grow, rising by a staggering 115% since the new millennium.  It seems, however, that some of the popular “menu items” are different. The types of procedures that patients are choosing is changing, as more specialized treatments become available.  There are several reasons for both the continued growth and the shift in trends.

We are seeing a new group of consumers entering the market place. According to a report released in April 2016 by the Pew Research Center and The United States Census Bureau, Millennial (born 1981-1997) have surpassed Baby Boomers (born 1946-1964) as America’s largest generation.   This generation came of age in the most technologically advanced time in the world, with plastic surgery as a household word. Their growing presence has helped to advance the market place in the direction of less invasive, more proactive and   more sophisticated procedures to “stay young”.

According to David H Song MD, President of the American Society of Plastic Surgery, “Patients have more options that ever before, and working closely with their surgeon, they’re able to focus on specific target areas of the body to achieve the look their desire.”

Over 1.7 million plastic surgery procedures were performed in 2015. The top 5 procedures are breast augmentation, liposuction, nose reshaping, eyelid surgery and tummy tuck.  For the first time since the year 2000, facelift surgery is not in the top 5.  Also of note is the fact that liposuction is down 37% since 2000, eyelid surgery is down 38 % since 2000.  This reflects the move toward new non- invasive or minimally invasive applications (e.g., lasers, light based procedures, ultrasonic fat reduction procedure) .

A closer look at the 15.9 million cosmetic procedures performed in the United

States in 2015 reveals that 14.2 million were minimally invasive.  Botox heads the list of the most common non-invasive procedures, up 759% since 2000.  Soft tissue fillers (e.g. Restylane, Juvederm) are the second most common procedure, up 274% since 2000.  Also on the list are non-invasive facial rejuvenation (lasers, peels etc.) and laser hair removal.  Less invasive procedures can be more affordable and appear to a broader range of patients.

Male patients now comprise about half of the cosmetic surgery market.  What is more dramatic than that number is the fact that men also account for more than 40 percent of aesthetic breast reduction surgeries.  A total of 27,465 procedures were performed on men in 2015 for reduction of male pattern breast tissue (gynecomastia) reflecting a 35% increase since 2000.

Statistics also show that 2015 was ‘the year of the rear’ with buttock implants being the most rapidly growing type of cosmetic surgery.  On average there was a buttock procedure performed every 30 minutes of every day?

The incontrovertible fact is that none of us will ever be any younger that we are this minute.  And the numbers clearly demonstrate that while the demographics may be changing, America’s love for plastic surgery remains a passionate affair.